We climbed La Soufriere in April of 2000, only to find it had been closed! 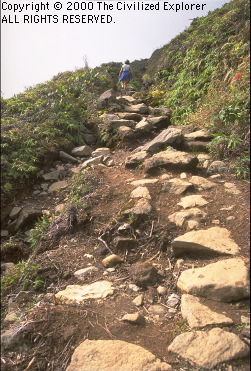 We drove up La Soufriere on a mostly cloudy day, keeping our eye on top of the volcano, which we caught brief glimpses of. We drove past the building with information on the mountain, although it seemed busier than usual. We arrived after lunch and found a nice parking space near the beginning of the trail up the side of the mountain.

As usual, the climb was rugged. The trail had suffered from some rains, and it had not been repaired in places where it had washed out. Nothing too difficult, but we had to pay attention to our footing. 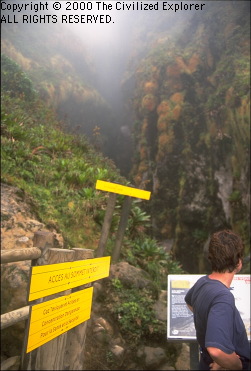 The views were as spectacular as we remembered from our last visit, although we had to look quickly as the clouds often obscured the views, then opened up all too briefly. We took our time, passing some people, being passed by more. Then we got to the part of the trail where it really starts to go vertical, and there was a fence across it, with a sign saying that access to the top was restricted due to dangerous levels of acids and sulfur. People were climbing down from the top and over the fence, so we looked at each other.

Up we went. The trail there was in seriously bad condition, requiring quite a bit of scrambling, often at nearly vertical levels. Once we got past that stretch, however, and on the top, the path was back to normal, and the trail had been clearly marked. We took some photographs and wandered around. The vent which had been loudly issuing steam under high pressure was now steaming quietly, and when the clouds broke, we had the best views of the top we have seen.

The climb back down was a scramble until we got to the fence blocking the path, and then we went on down. As it turned out, we were the last persons off the volcano, the last car in the lot. The sun was going down, and the light was gorgeous. We suggest that you find out if the volcano has re-opened before you make the trip; ask at your hotel or at a tourist office if you are on Grande Terre and making the trip just for the climb. 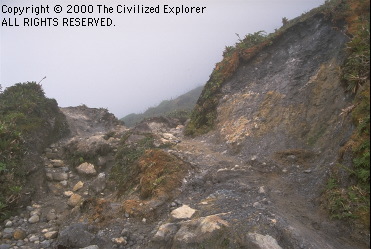 The photos on this page are reduced in size. We have a page of thumbnails with links to full size images and a 360-degree panorama of the crater, if you are interested.