The Crucifix and the Shrine, Les Saintes

Terre d'Haute has a large crucifix in the hills above the harbor which gives a spectacular view of the harbor and the town below. Our panorama was made so close to the crucifix that it was not entirely visible. This page has links to photos of the crucifix and the shrine up the hill behind it.

"The Shrine" is above the crucifix. You can see the series of steps in the photograph above. The flowers are fresh. Image size is about 768x512 and 150k. 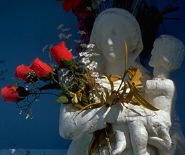 "The Virgin" holds a bouquet of flowers in addition to the Child. Image size is about 512x768 and 86K.