We occasionally get emails from people who want to know how the "natives" dress on Guadeloupe. The real answer is, "Very well." People on Guadeloupe dress just as you do, but perhaps with a bit better care in their selections, perhaps a bit better taste.

We provide here a photograph of three models in costumes which are modern and fanciful interpretations of women's fashions of the late 19th Century. 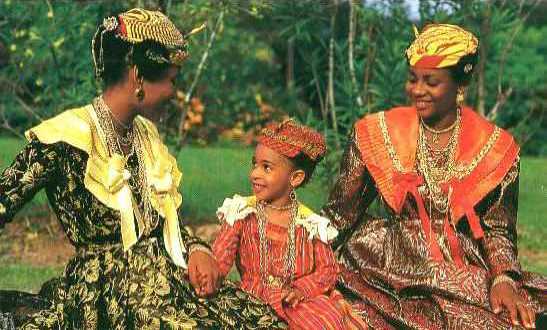 The facts, however, are much more brutal than these garments indicate. Whites on the island in the early years of colonialism dressed as closely to European styles as possible, while the slaves imported from Africa were dressed in the meanest rags of grain bags, canvas, and cast- off clothing. The clothing of slaves was sewn by hand without benefit of proper needles and threads, patterns, or fittings.

When slavery finally ended in the late 1800s, indentured servants were imported to Guadeloupe from India. These poor souls brought with them their religion and madras. The Africans adopted the inexpensive cotton fabric and turned it to their own styles and customs, adapting it to the patterns of Europeans with influences of their African heritage. The patterns shown in the photograph reflect the style of the Victorian era in Guadeloupe, but only the little girl is shown in a madras fabric. More typical of that era would be a white cotton blouse tucked into a colorful madras skirt worn over several petticoats. The scarf worn over the shoulders would match or be complementary to the skirt. The ladies' caps would be of yet another, but carefully matching, pattern, usually with either a colorful feather or a bloom tucked into a fold above the right ear. The costume jewelry shown here would be well beyond the means of a typical freed slave in the 1890s.

Thanks for stopping by.